Sustained economic growth in China and the rest of the developing world has seen the demand for all the metals grow faster than the minerals industry can develop new mines and smelters.  The result is soaring prices for metals, and for coal and oil. 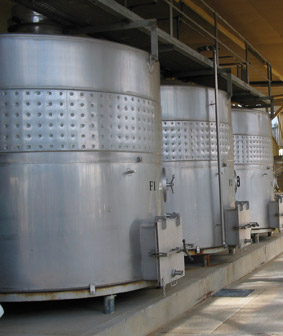 For a country like Australia - a big supplier of metals - it’s good news, and we have all enjoyed the benefits of the minerals boom. But those of us in the stainless steel industry have seen prices increase markedly, and it has been hard to cope with.  We live in interesting times.

In broad terms there are two main factors influencing the price development of stainless steel: the cost of raw material inputs and the level of demand measured against the capacity to make the steel (the capacity utilisation).

Much of the increase in stainless steel prices has come from the increase in the price of raw material inputs, and particularly nickel, which went through a peak over US$50,000/ton in May 2007.

But it’s not just nickel.  As we saw nickel start to get over its spike, the press filled with stories of the increases our big miners were seeking for their iron ore.  And quietly, the price of chromium has soared from under $600/ton to over $6,000/ton.

Molybdenum, the element added to improve corrosion resistance above what you can get with chromium, has outdone all the rest, from $6,200/ton to a peak over $95,000/ton!  It’s lucky a mere 2 per cent of molybdenum is so effective in improving corrosion resistance.

In response, stainless steel makers and users have sought to get the best value from the alloying elements they use, by shifting between grade families and grades.

We have seen the rise of the 200 series austenitics, which use manganese instead of some or all of the nickel to get the ductile austenite structure.  They peaked at about 10 per cent of world production – but of course the increase in demand for manganese then pushed up its price, making the 200 series less attractive economically.

Duplex grades also offer a potentially cheaper alternative, most using only half the nickel of an austenitic grade with similar corrosion resistance.  A new development, LDX 2101 from Outokumpu, combines the approaches by substituting nearly all of the nickel with manganese.

Ferritic grades have a completely different crystal structure to austenitic grades because they have no nickel added.  That can make their alloying costs much lower, but the steelmaking needed to make good quality steels is more exacting, so the overall cost savings are not as dramatic.

Nevertheless, they can offer useful cost savings.  In recent years they have grown from about 20 per cent of world stainless steel production to 25 per cent or more, and the major steelmakers are predicting they will continue to grow. A recent publication by the International Stainless Steel Forum (ISSF) details the possibilities with this family of grades.

All the talk of metals price increases makes it hard to know what relative contribution each of the elements makes to the overall cost of stainless steel. Believe it or not, many people are not even aware that all stainless steels are mostly iron, so the news about iron ore prices tends to be lost on them. What does doubling the cost of iron ore do to the cost of stainless steel? And how does that compare with the other alloying elements?  Come to that, what effect does the oil price have? It’s not so long since respected economists were predicting $200 per barrel for oil.

The costs are an estimate of what the steelmaker has to pay to assemble the raw materials to make stainless steel. They don’t take into account the yield achieved, or possible premiums or contract prices paid.  Nevertheless, the graphs illustrate what has happened with alloy costs.  Of course, the steelmaker then has to turn these ingredients into stainless steel, so his overall costs are much higher.  We might expect higher conversion costs for ferritics, duplex steels and the manganese austenitics over traditional stainless steels such as 304 and 316. 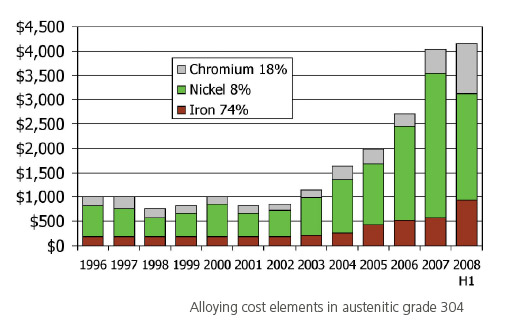 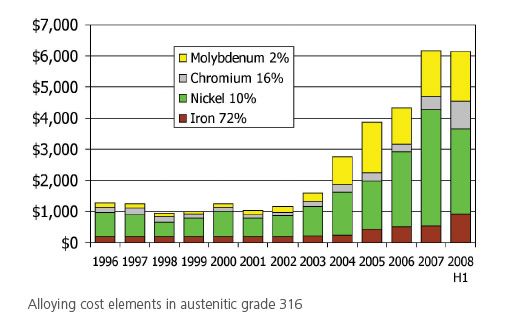 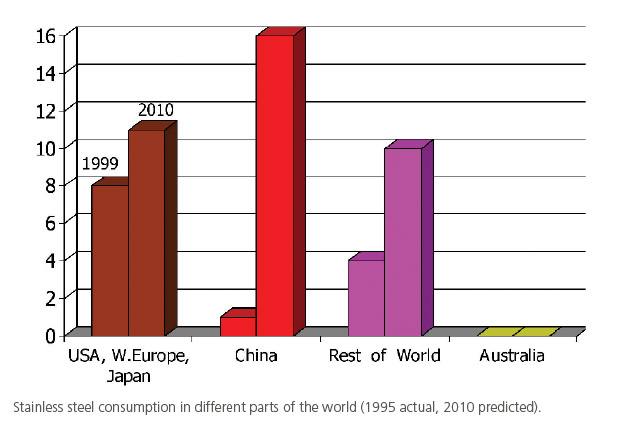 It is important to recognise that raw materials costs are not the only factor in steel pricing and that many factors will influence the day to day prices offered by suppliers.  We are only looking at the costs of the main alloying elements here which is fundamental but not the whole story.

In 304 the biggest culprit for cost rises has been nickel, but in 2008 nickel cost has fallen back to the 2006 level – and chromium and iron have taken over.  Notice that the iron in stainless steel now costs more than all the alloying elements in stainless steel together did in the early 2000’s – and chromium is now costing more than nickel used to.

Astute observers will know that the price of stainless steel has actually been falling in 2008, despite the alloying costs being higher than in 2007.  The lull in the demand for stainless steel has forced the mills to reduce their prices to stimulate sales, and these are tough times for the mills. 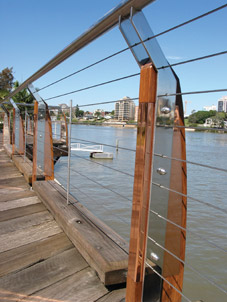 So what has caused all these surges in prices, and where do we go from here – higher, stable, or a return to the earlier levels?  The cause is clear; it is economic growth in the developing world, outside the mature, stable economies that used to dominate the world economy.

This is particularly true for the BRIC group: Brazil, Russia, India and China.  These have all been growing strongly and sustainedly for a number of years, China being pre-eminent.
While their economies were still small, the net increase in demand for metals was not much affected, but their overall demand has now grown to the extent that even when their economies slow, world net demand keeps growing strongly.

The IMF continues to forecast growth rates over 10 per cent for China out to 2013.  After all, over a billion people have lived in poverty for a long time, and their government is committed to developing the country to help them out of it.  Analysts reckon that only about 15 per cent of the demand for metals in China is fuelled by demand outside China, the rest is for domestic consumption.

Stainless steel has not been singled out by these shifts in the world economy.  All the metals, except aluminium and zinc, are currently at about five times the price they were when the boom started.  So much for materials substitution as a way of getting over the price increases!  China has grown so strongly that over the current decade it will consume over half of the copper, aluminium, nickel and zinc used in the world.  Even if China does falter, the other developing countries are not far behind.

The rate of growth in demand is a real challenge for the minerals industry to keep up with it.  It’s not quite the same situation as we see in oil, but it’s not markedly different.  Does anybody think we will ever return to $30 a barrel for oil?  Unlikely, and it’s unlikely we’ll see a return to historical levels for metal prices either.