The spirit of the Anzacs is evoked in a new architecturally stunning, stainless steel walkway that unfolds around Newcastle’s cliffs and links Strzelecki Lookout to Bar Beach.

The much-anticipated Newcastle Memorial Walk opened on 24 April 2015 on the eve of the Anzac centenary, and features spectacular 360-degree views of Newcastle city and coastline.

The 450m raised walkway forms part of Newcastle City Council’s ‘Bathers Way Project’, a $29 million foreshore development and revitalisation program to link Merewether Beach with Nobby Beach via a coastal walk. The total cost of the walkway was $4.5 million, $3 million of which was contributed by BHP Billiton to mark their 100-year anniversary since the commencement of steel making in the Hunter region.

In commemoration of the Anzacs the walkway features silhouettes of soldiers, laser cut from 10mm thick weathering steel, specified to withstand the coastal wind load. These silhouettes are engraved with 3,860 family names of almost 11,000 known Hunter Valley men and women who served in the Australian Imperial Force, Royal Australian Navy, Australian Army Nursing Service and British and Commonwealth forces during World War 1 from 1914-1918.

“During the design phase, we looked at the history of the site and build location next to Memorial Drive, which was originally constructed in 1922 to pay tribute to the soldiers who fought in World War I,” Collins said.

“The design concept of what is commonly known as ‘the wave effect’ was drawn on the fact that DNA was used to identify the human remains of soldiers, and this process stood as the connection between the soldiers and their families.”

Constructed by Waeger Constructions and engineered by Northrop Engineers, the walkway has a structural design life of 70 years, as required by Newcastle City Council. Grade 316L stainless steel was specified due to its sustainable, corrosion resistance and ductile properties. The cliff top location of the walkway overlooking the Pacific Ocean was also a determining factor given the high wind and salt exposure.

Good scheduling and planning ensured on-time delivery of the stainless steel over a period of 14 weeks, which was sourced from three overseas mills. Positive material identification (PMI) testing was performed by the mills on all stainless steel supplied to ensure the specified grade of 316L was delivered.

Fabricated and installed by ASSDA Member and Accredited Fabricator SGM Construction & Fabrication, the 160m of stainless steel bridge sections consist of eight, 20m single spans (four under trusses and four over trusses) each weighing 6.5 tonnes. The frame of each section is fabricated from 12 square hollow sections welded to two rectangular hollow   sections, and the walking surface is laid over the frame. On either side of the truss, the wave-like effect was created by bending and rolling wall pipe to sweep above the frame for the over trusses and below the frame for the under trusses.

Seven Y-shaped precast concrete pylons up to 8.8m high and 3.4m wide, and two abutments, support the bridge sections of the walkway that reach up to 9m above the ground.

The decking of the walkway was laid with fibre-reinforced plastic, and being a non-structural component, was specified with a 44-year design life. The safety aspects of the bridge are completed with hand railings, which are welded on to the bridge trusses inside the curved pipe sections.

Over 760m of handrails and 600m of vertical balustrades cover the length of the bridge, specified with a maximum Ra value of 0.5. ASSDA Member Australian Pickling & Passivation Service was contracted to electropolish the balustrades and pickle and passivate the completed bridge sections. A purpose-built electropolishing unit, consisting of six baths, was set up to handle and achieve the specified finish of the 1.5m high x 6m long balustrade panels each weighing 180kg.

With an allotted fabrication period of only four months, SGM Fabrication & Construction manufactured the bridge sections using its 2000m2 workshop to full capacity to meet the critical deadline for Anzac Day.

As the walkway runs parallel to Memorial Drive, the main thoroughfare from King Edward Park to Merewether Beach, the erection of the pylons and installation of the bridge sections took place only during a 10-hour window over two nights to avoid prolonged temporary road closures.

Coastal undermining was a challenge for the structural engineers, however good design and construction ensured environmental protection of the sensitive coastal site to minimise erosion.

Mr Collins said the key to the project’s cost control and overall success was the engagement of local contractors.

“The direct involvement of each contractor’s Directors ensured seamless communication and full control of each project phase. The walkway is already an icon for Newcastle, and everyone who has worked on the project is thrilled over its success,” Collins said.

More than two million people visit Newcastle’s beaches every year, and the Newcastle Memorial Walk is already one of Australia’s most remarkable coastal walkways and a significant World War I tribute. 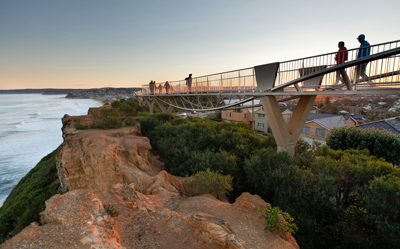 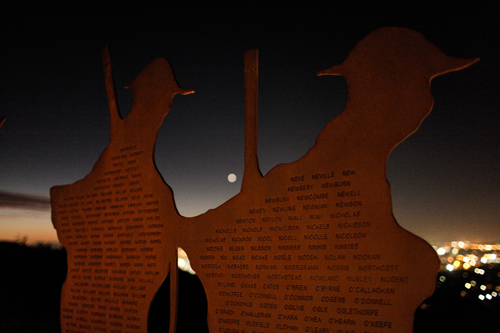 This article is featured in Australian Stainless Issue 55 (Winter 2015).