The magic of a clear night sky filled with stars has inspired many creative souls. Now, through a collaboration between science and art, a stainless steel sculpture installed at the Australian National University in Canberra brings new depth to the connection between ourselves and the stars above. 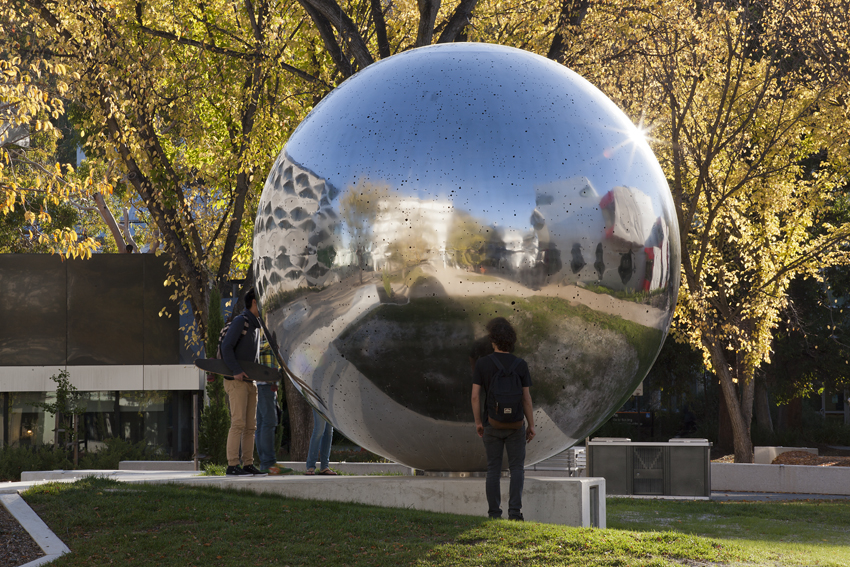 The 4 metre diameter, mirror-polished stainless steel sphere (called UNA), which sits in the science precinct at ANU, is so much more than first meets the eye. Designed by UK artist Wolfgang Buttress, UNA features 9,100 laser-cut perforations, which were mapped in collaboration with ANU astrophysicist Dr Daniel Bayliss.

The holes match the 9,100 stars that we can see with the naked eye from Earth and vary in size according to the brightness of the stars in the night sky (the brighter the star, the larger the hole).

Inside the sphere sits a second, two metre diameter mirror polished, stainless steel sphere. When viewed through one of the outer perforations, the internal sphere reflects small points of light from the outer sphere, creating, according to Mr Buttress, a microcosm of our perceived night sky.

“One makes connections to one self and the stars above. We are all made from stardust,” he said.

The magic enters a different realm at night, thanks to the fibre optic lights that sit in the centre of the two spheres, casting a glow through the perforations.

Mr Buttress said the use of stainless steel and high quality fabrication were integral to the success of the project.

Aside from the ability to be mirror polished, he said stainless steel was specified due to its strength, resilience and, if maintained properly, the fact that it will look as good in 50 years as it does now.

The spheres incorporate around 2000kg of 4mm 316L, 2B finish stainless steel, which was supplied in 24 pieces by ASSDA Major Sponsor Sandvik Materials Technology (now Vulcan Stainless). The pieces were laser cut to shape in-house on one of Sandvik’s four laser machines. Sandvik VIC/TAS State Manager Stephen Orridge said each hole was unique in its shape and the work involved about 40 hours of programming.

The sheet was pressed by Dished & Flanged Ends to create the curved forms for both the inner and outer spheres. ASSDA Member and Accredited Fabricator NRG Piping then joined and welded each segment with only 1mm tolerance, followed by polishing. NRG Piping co-ordinated the fabrication, transport and installation of UNA.

Mr Buttress said the welding had to be done carefully to minimise distortion as all would be seen when it was mirror polished. “There is nowhere to hide. NRG Piping are amazing fabricators as they totally understand the properties and essence of stainless steel,” he said.

Because the inner sphere had to be positioned inside the outer sphere during the fabrication process, a 600mm hole at the base allowed enough room for a welder to get access inside to polish out the internal welds.

The end result is one of the artist’s favourite pieces that he has created. “By day, the inner world is revealed on close inspection and at night it has a different character as light pours out of her like a beacon. It works on a micro and macro level, at day and by night. It was a great marriage between art, architecture and engineering,” Mr Buttress said.