With Queensland coal exports forecast to increase to 250mtpa by 2015, the strength and durability of the state’s expanding coal transport infrastructure and rail systems is critical to ensuring export capacity.

Sandvik Mining & Construction manufactured the conveyor frames for the project, and APAPS pickled the frames before delivery to the terminal.

Stainless steel can corrode in service if there is contamination of the surface. Pickling involves the removal by chemical means of any high-temperature scale and any adjacent low chromium layer of metal from the surface of stainless steel.

The client requested that the stainless steel conveyor frames were pickled to achieve a product that would not rust. According to APAPS’s Director Richard Raper, ‘Pickling stainless steel removes all traces of burnt chromium caused by heat from welding and any iron contamination caused by handling and processing during fabrication.’ He added that several variables must be considered when pickling stainless steel, including the grade, surface finish, the size and shape of the structure and bath temperature. 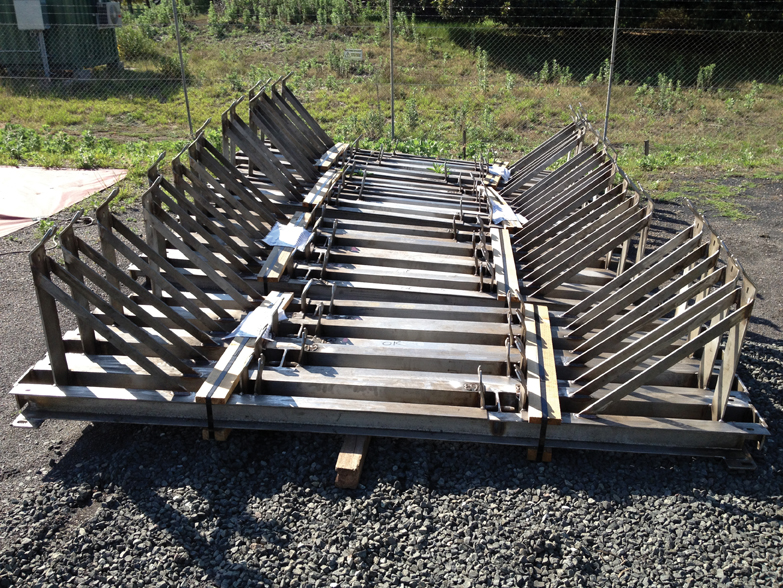 Transported by road on B-double trucks from Mackay to the APAPS workshop in Newcastle, the conveyor frames arrived a dull grey colour and heavily soiled from anti-spatter and other contaminants. Pre-cleaning of the stainless steel was required prior to pickling as contamination on the surface can reduce the effect of pickling. The frames were sprayed using an Avesta 401 Cleaner and Callington Haven Brite Wash and left for 30 minutes before being high-pressure washed with hot water.

The immersion pickling method was used to pickle the conveyor frames. They were immersed in a nitric and hydrofluoric acid bath for approximately 1.5 hours, which APAPS’s own pickling technician determined following a number of inspections. Avesta Pickling Bath 302 was used at a temperature between 25-30°C. The frames were lifted from the bath and allowed to drain for 15 minutes before being washed down using high-pressure water.

APAPS’s pickling of the stainless steel by was central to ensuring the performance and durability of the conveyor frames and maximising their corrosion resistance. The treatment also produced a consistent and smooth finish with aesthetic appeal.

After the pickling treatment, the conveyor frames were strapped together in batches of five, with timber placed between the stainless steel and strapping. They were then transferred and loaded using a forklift with stainless steel slippers [covers] to protect the frames from cross-contamination. Due to the physical nature of the conveyor frames, only one layer of frames at a time could be placed on the truck deck, and these were tied down with web straps. Transportation took an average of 3 days between Newcastle and Mackay.

The project was completed in 10 weeks and delivered back to Mackay in stages. The APAPS team worked two shifts a day to complete the work on time for Sandvik.

Richard Raper says the project was a testament to APAPS’s membership of ASSDA, as it was the Association’s referral that won him the job.

‘This is a good showcase of how ASSDA members and Accredited fabricators can achieve great outcomes and how clients get what they expect when specifying stainless steel.’