Telling the tale of migration to Victoria is 'The Travellers', a series of giant stainless steel sculptures sliding quietly across the Sandridge Rail Bridge on Melbourne's Yarra River. 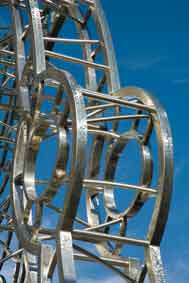 Unveiled just three days from the start of the Melbourne 2006 Commonwealth Games, the 10 sculptures are a tribute to multiculturalism.

Each of 'The Travellers' figures represents a period from our Indigenous and immigrant histories (as defined by historian Dr James Jupp) and were designed by Lebanese Artist, Nadim Karam of Atelier Hapsitus.

'Gayip - The Aboriginal Period', the first sculpture, is stationed permanently on the river bank to depict the Indigenous owners of the area who were here already.

Nine of the 10 sculptures cross the river three times a day on a fixed bogie system to represent stages of migration in Australia's history from the convict and gold rush periods through to European and refugee settlement.

More than 3.7 km of stainless steel (in 4455 pieces) was used to create the sculptures.

The sculptures required much tighter radii than had previously been delivered, and Inductabend's equipment was pushed to its limits when bending the steel sections.

Following fabrication, the sculptures were then polished to 0.4 Ra, cleaned and then passivated to ensure high corrosion resistance.

Originally built in 1888 by David Munro, the Sandridge Bridge is considered one of the earliest examples of steel girder bridge construction in Australia.

The $3 million 'Travellers' sculptures project was part of an $18.5 million Sandridge Bridge Precinct development funded by the City of Melbourne and the State Government that includes a new pedestrian bridge, a plaza and a youth precinct on the north bank.