The Ducati Sydney Racing Team have many reasons to be proud after Twin Cylinder motorcycle rider, Craig McMartin, won the 2004 Australian Pro-Twins Championship. 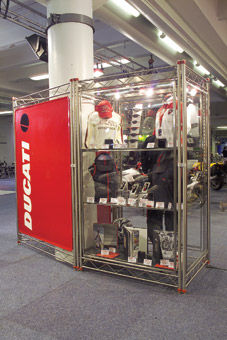 McMartin, who also won the championship in 2001 and 2002, rode his Ducati Sydney 999S to his third victory at the final round held in September 2004 at Phillip Island, Victoria.

The success of McMartin and fellow Ducati riders in the Championship also contributed to the Ducati team winning the fourth successive Manufacturers Championship.

Every Championship win gives Ducati the edge over other motorcycle manufacturers as they compete for the attention of enthusiasts seeking to purchase their next motorcycle.

To showcase the achievements of Craig McMartin and the Ducati Sydney Racing Team, team sponsor and ASSDA member, Interspace Manufacturing, designed a range of displays.

The Sydney-based company designs, develops, prototypes, tests, manufactures and supplies all types of architectural products where quality and design is important.

This article was featured in Australian Stainless magazine - Issue 32, Winter 2005.