Lord Mayor John So said the Piazza will be a wonderful addition to Melbourne's famous Italian cultural precinct.

“For generations, Argyle Square has been a place where city residents, workers and visitors have stopped to soak up the atmosphere of Lygon Street, eat gelati and catch up with friends and family,” the Lord Mayor John So said.

In December 2005, Melbourne City Council released a statement announcing that all powder-coated seats, litter bins, benches and drinking fountains in the city centre will be replaced with stainless steel finishes over the next ten years to give the streetscape a sleek, modern feel. 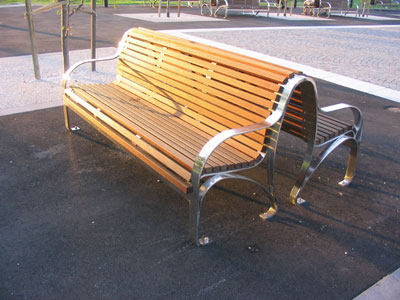 Lord Mayor John So said the stainless steel replacements would be designed to improve its functionality for the elderly, the young and people with disabilities, while withstanding high levels of wear and tear.

“The maintenance cost of stainless steel is half that of powder-coated items, while its lifespan is twice as long,” the Lord Mayor said.

Also, to celebrate Melbourne's successful hosting of the 2006 Commonwealth Games and to recognise the many athletes who participated, Melbourne City Council commissioned T.R.J. Engineering to fabricate stainless steel cladding for existing street poles in Bourke Street.

These cladded fabrications proudly feature the names of all the teams that competed in the Melbourne 2006 Commonwealth Games acid etched into the stainless steel.