With a striking and innovative design evoking visions of the Singapore based Helix Bridge, stainless steel has formed an integral part in creating one of Sydney’s most exciting new structures.

Commissioned by Landcom as part of the Lachlan Line Precinct development project in North West Sydney’s Macquarie Park, the yet to be officially named cyclist bridge provides visual flair, safe accessibility, and excitement to the area. In an area with typically heavy traffic congestion, the project’s promotion of reduced car dependency creates a significant positive impact to the surrounding environment.

The design is the first of its kind in Australia, utilising a double helix arrangement with a varying diameter along its curving 178m length. While the design elements certainly lend themselves well to aesthetics, structural requirements dictated much of the overall shape. A steel truss arrangement is used, required for the long sections spanning the multiple roads below its footprint. The diameter of the spiral increases at the bridge supports and tapers along its span.  At its narrowest, it is 5.5m in diameter, and 7.8m at its widest.

Approximately 170t of 2205 grade duplex stainless steel was used, along with around 220t of structural mild steel. Due to the large quantity of material required, multiple distributors supplied material mostly on an indent basis, with some delivered ex-stock. ASSDA Members Midway Metals, Stirlings Performance Steels and Vulcan Stainless all supplied material, with the majority of plate (up to 80mm in thickness) produced by ASSDA Member Outokumpu, managed through their Melbourne office.

A minimum 100-year service life with minimal maintenance (becoming increasingly common in the design of bridges) was a key criterion, particularly important for the hard to access structural components. From the beginning, 2205 duplex grade presented as an ideal material, thanks to its hybridised microstructural properties granting it superior mechanical properties to many forms of mild and stainless steel.

Put simply, being stronger allows for thinner sections to be used or, alternatively, more scope for efficient design such as larger spanning or increased resistance to bending moments. Mild steel was retained  for the helical outer structure, and painted blue, which was a central design requirement.

Arup proposed duplex stainless steel for the deck structure and wearing surface within the helix due its increased strength to weight  properties whilst maintaining high durability performance.

Outokumpu played an instrumental role in advocating the use of the material properties of duplex grade at the early design and concept stages. Backed up by global materials experts and with a wealth of expertise in supplying stainless materials for bridges all over the world, Outokumpu aimed to provide a technical solution through the use of duplex stainless, rather than simply tender for the supply of material. “The use of duplex stainless steels in bridges around the world is becoming more and more the material of choice, so it was great to see Arup in Australia embrace it in its design”, said Con Logos, Vice President APAC at Outokumpu. “A special thanks to George Miech from my team for his tireless effort in the early stages, working closely with both Arup and RMS to have duplex stainless specified”.

Outokumpu also assisted the fabricator and the end client, Transport for NSW, with expertise, advice, and preliminary procedures in welding the material, particularly vital with the thicker sections which require great care to ensure optimal material properties are realised in the weld and adjacent areas.

The bridge was fabricated in Sydney in four modules, which were trial assembled prior to being delivered to site, where the four segments were positioned and secured over the course of four weekends. Specially designed lifting assemblies were necessary to ensure the segments were not overstressed.

As bridge design increasingly demands greater durability, aesthetic and creative licence and structural performance, stainless steel, of the duplex family in particular, presents a wonderful option now and into the future. 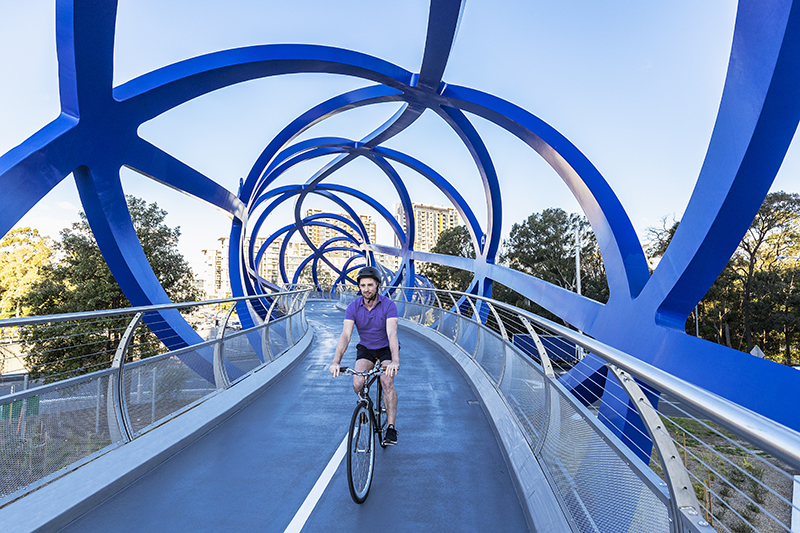 This article is featured in Australian Stainless Magazine issue 71, 2021.