When comparing hot and cold formed stainless steel, the first question you would ask yourself is: are there any chemical differences between the two? ASSDA has previously published articles on the various surface finishes including the few hot and multiple cold finished processes, however this article concentrates on the differences.

Since the 1970s, most stainless steel is produced by melting in an Electric Arc Furnace (EAF) and then the molten stainless steel is transferred to an Argon Oxygen Decarburisation (AOD) vessel or, less commonly, a Vacuum Oxygen Decarburisation (VOD) vessel. These processes control impurities such as carbon, sulphur, nitrogen, hydrogen and other impurities which could form oxide precipitates. For critical applications such as aerospace or precipitation hardening alloys, further refining is possible, but this is a smaller market. Critically, in AOD, using the injection of inert argon as the stirring agent into the melt allows control of nitrogen additions, e.g., for duplex or high austenitic stainless steels.

The basic chemistry of a specific grade of stainless steel is the same regardless of how it is subsequently shaped, i.e., as hot or cold rolled, hot forged, cold drawn/shaped or simply cast –  with the proviso that cast stainless steels typically have more chromium and (often) more silicon than their wrought counterparts. In addition, even if cast products have been stress relieved, their microstructure is dendritic so that there can be significant composition differences (localised differences in corrosion susceptibility) between the early solidifying dendrites and the final bulk solidification.

Producing hot formed stainless steel is deceptively simple as shown in the graphic. Currently, for about 95% of production, the molten metal is decanted from the AOD into a cooled continuous caster and emerges horizontally as a slab. The microstructure in the slab is columnar from the outsides (because of the cooling by the caster walls) with a relatively uniform equaxial microstructure in the centre. It is also covered with heavy black oxide scale with a chromium deficient layer underneath – as with weld tints. Typically, the slab is then surface ground to remove solidification features and the scale which would both otherwise be incorporated into the surface during subsequent rolling. The slab is then charged into a reheating furnace and hot rolled to homogenise the microstructure and provide either plate or coil as the product form. The grains will now be more oriented along the rolling direction. The microstructure is then further refined (and internal stresses reduced) by annealing above 1000oC.

Unless the steel is to be used where appearance and maximum corrosion resistance is not critical, e.g., in a furnace, then after hot rolling it would be shot blasted to break up the scale and then pickled. The pickling causes the dimpled appearance of a Hot Rolled Annealed and Pickled (HRAP) plate surface because the pickling acid attacks the base metal at the defects in the black oxide scale. It also gives a typical surface roughness of 5 or 6 µm Ra. There is a potentially cosmetic corrosion issue if the (typically) fast pickle does not completely remove any shallow intergranular oxide penetrations, however this is unusual. For long product such as angles or channels, another visual distinction is that the edges meet at 90o compared to the radius of curvature determined by the thickness and ductility of a cold rolled product.

Cold rolled flat product is quite different because it usually starts at room temperature with a dimpled surface and finishes with thinner material – and watching the increase in speed of the sheet as it gets thinner is quite startling. There is a significantly more elongated microstructure along the rolling direction, and this enhances the anisotropy in transverse to longitudinal strength compared to the relatively slight effect for hot rolled material. Long product is not cold rolled but more correctly it is cold  shaped or formed.

The increase in strength with cold work can be substantial, especially in thin materials as the cold work increase can enhance the strength of the full depth. As an example, the table from ASTM A666 data shows the substantial change in mechanical properties for 304 from annealed to half hard, i.e. half the absolute maximum possible strength – which would have negligible ductility.

Effect of cold work on strength and ductility of 304

One effect of the increase in strength with cold work is that the limit of proportionality will increase with cold work, i.e., the linear deflection occurs up to a higher stress. The reduction in break elongation is simply reflecting the proof stress closing on the tensile stress from 40% to 73% as shown below.

Variation of thickness tolerances for cold and hot rolled materials

There are also differences in the tolerance between cold and hot formed material as shown by comparisons in A480 (flat product – sheet vs. plate) and A484 (sections). However, it is not as simple as “hot formed is less precise than cold formed” as seen below.

Often it is important to consider appearance and corrosion resistance to the “bright and shiny” benchmark. Hot rolled material is always going to be dimpled, even when it is electropolished and exhibiting a brilliant lustre. It will be marginally more difficult to clean than a smoother cold rolled surface but abrading the surface to give a roughness of less than 0.5 µm Ra is counterproductive. 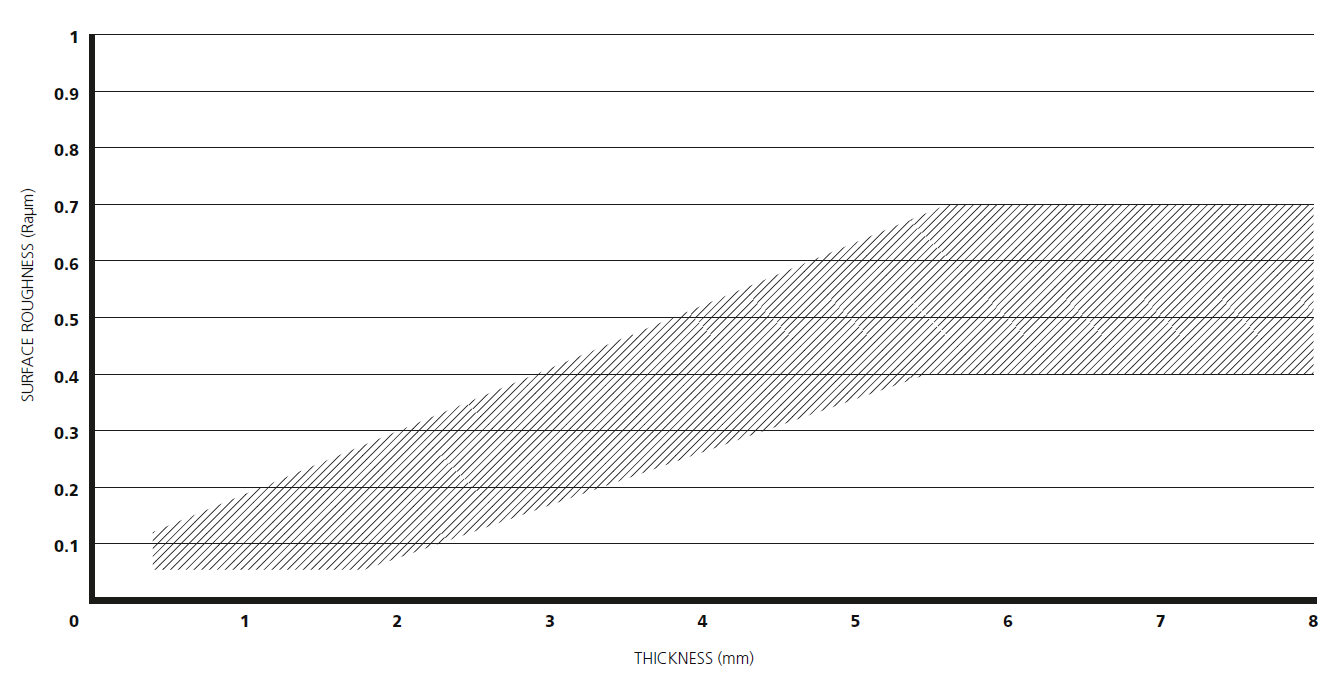 The inherent roughness of a cold rolled sheet decreases steadily as the plate is rolled thinner as shown in graph. It shows the decrease of Ra from the crushing of the peaks left from the hot rolling as the sheet gets thinner. The graph is for cold rolled annealed and pickled (2B) material and is useful when someone asks for a 2B finish for a thickness not in the band. However, thickness of pickled materials is not relevant to the corrosion resistance whereas the Ra is critical to an abraded surface both for reasons of cleanability and possible crevices from torn surface flaps plus, if not passivated, exposing sulphide inclusions.

This article is featured in Australian Stainless Magazine issue 71, 2021.