Ferritics account for approximately 25% of stainless steel use worldwide. The name arises because these alloys have similar properties to carbon steels when they are bent or cut and, unlike the well-known 304 and 316 austenitic grades, ferritics are strongly attracted to a magnet.

There is a major misconception that ferritic stainless steels are less corrosion resistant than austenitic alloys. On the contrary, for any required level of corrosion resistance (or Pitting Resistance Equivalent [PRE]), you can select a specific stainless steel from either the austenitic or ferritic family depending on the physical properties desired. Another similarity of these two families of stainless steel is that neither can be hardened by heat treatment. However, a significant difference is that, in common with carbon steels, ferritic stainless steels become brittle when used in sub-zero temperatures. The actual transition temperature depends on the specific alloy, but it increases for welded fabrications.

Apart from the 12% chromium utility alloys, the sheet thickness limits for the supply and welding of ferritics are due to its metallurgical structure. Unlike austenitic stainless steels, the microstructure does not transform during welding, and so the initially microscopic ferrite grains can grow and embrittle the metal.

Ferritics have gained wider acceptance since changes in its alloy design and production methods allowed welding. The adoption of the Argon Oxygen Decarburisation (AOD) refining process in the 1970s also assisted, allowing both the reduction of impurity levels and, critical for welding, good control of both carbon and nitrogen content.

Notes:
A. Balance of composition important to avoid welding corrosion issues
B. Also derivative grades with low carbon and Ti/Nb to allow welding
C. Not good indicator of corrosion resistance especially if welded because of high carbon
D. For comparison, the PRE of 304 is ~18.5 and 316  ~23.5.

Available Ferritic Alloys and Applications
The Ferritic Solution (TFS), published by the International Stainless Steel Forum, lists 71 ferritic alloys in ASTM, EN and JSA standards, although most are in sheet form. For example, A240 lists 26 alloys as flat product while ASTM A276 only has nine alloys listed as bar or shape. TFS classifies ferritic alloys into five groups based on chromium content:

Table 1 lists common names, UNS numbers, typical compositions and applications of representative alloys. There are also families of alloys derived from the same root UNS numbers. In addition, a growing number of proprietary ferritic alloys have been and are being developed especially in Japan. The PRE column is a measure of corrosion resistance based on composition, i.e. PRE = %Cr + 3.3% Mo. The 16%N term used for austenitic and duplex grades is omitted because nitrogen is virtually insoluble in ferritic alloys.

Corrosion and Heat Resistance
These are not the same. Oxidation (or scaling) resistance of stainless steels in air depends on the stability of the oxide layer (or scale) on the surface. This is not the thin (nanometres) passive film formed in water but the thicker, high temperature oxide formed above about 250oC. Its protective properties depend on its bond to the metal surface below. In turn, this depends on the relative expansion of the oxide and the metal surface.

As shown in Table 3, ferritic alloys have low thermal expansion compared to austenitics, which means the adhesion of their protective scale is better in thermal cycling conditions. In practical terms, this means that ferritic alloys have higher scaling temperature limits for intermittent service than in continuous service, whereas the reverse is true for austenitic alloys.

At temperatures in the high hundreds (oC), the relatively low strength of most ferritic alloys limits their use, although the niobium-treated ferritics have similar strength to the austentic alloys. Ferritic (and duplex) grades should not be used in the band around 475oC as metallurgical phase transformations cause embrittlement during extended exposures.

In oxygen-rich environments, the simple wet corrosion resistance of ferritic, austenitic and duplex alloys is well-described by the PRE index as given in Table 1. The predictions are for a passive surface and will be unreliable if the surface has been contaminated by carbon steel or if welding heat tint has not been removed.

PRE does not influence the spidery cracking that occurs in austenitic alloys that are stressed and exposed to warm or hot chloride solutions. Ferritic and duplex grades are effectively immune to this stress corrosion cracking attack and it is the reason why instant hot water tanks used in kitchens are ferritic alloys, usually 444. 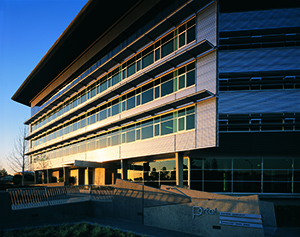 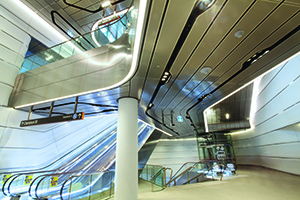 Mechanical and Fabrication Properties
Because of their microstructure, ferritic stainless steels behave very similarly to carbon steels in bending, roll forming, spinning and shaping. Fabricators can use the same techniques for ferritics when forming roofs or couplings.

Ferritics do not cold-work like austenitics and so, for the same thickness, they have less springback. Although deep drawing is easier for ferritics than austenitics, the higher chromium ferritics can suffer from ridging, so there are not many deep drawing applications. Stretch forming can only be to about 50% of that achieved with austenitics, as might be expected from the difference in ductility. Table 2 compares the mechanical properties of several ferritics with 304 and carbon steel. In broad outline, ferritic stainless steels have a higher yield (or strictly 0.2% proof stress) than austenitic stainless steels, lower tensile strength and about half the elongation at fracture. The modulus of elasticity is similar to carbon steels, so deflections under loading will be comparable.

With the exception of the 12% chromium utility grades, welding of ferritics requires more skill than welding austenitics because of their sensitivity to impurities, which may cause cracking in the heat-affected zone. Very thorough attention to cleanliness is required as well as the use of high purity shielding gas and care in gas shielding – particularly outside the workshop where drafts can be a problem. Because of the risk of grain growth (and consequent low toughness) with extended periods at high temperatures, low heat input is required and pulsed welding equipment is a useful tool. This metallurgical sensitivity is the reason why ferritics are rarely available in thicknesses greater than 3mm. However, the low thermal expansion and better thermal conductivity of ferritics compared to austenitics means that welding distortion is less critical for all ferritics (refer to Table 3).

Like all stainless steels, the corrosion resistance of welded ferritics is restored if all heat tint is removed after welding, preferably by pickling. Mechanical abrasion is a good second best provided the surface roughness is not excessive.

Some ferritic grades have been in large scale commercial production for many years, but the variety of grades now available has only been possible because of new melting and refining technologies. A large number of grades now exist, and a great deal of active research and alloy development is continuing.