Water is a fundamental human need. It is central to our lives, from what we drink, to what we use in washing ourselves, our clothes and a multitude of other uses. Safe, clean and palatable water comes at a price though, and when leaks occur in distribution systems, additional costs are incurred as even more water must be found and treated. Security of water supply is a prerequisite for sustainable growth and dealing with leakage is a universal challenge. To combat the scourge of leaks, a number of water distribution authorities across the world have implemented affordable solutions utilising stainless steel, which not only saves money, but water, a precious resource.

Prior to the 1980’s, water shortages in Tokyo were chronic and rationing was occasionally required. When the city’s water provider, the Tokyo Metropolitan Government Waterworks Bureau (TMGWB), analysed leakage repairs, they determined that 97% were on the distribution pipes of 50mm diameter or less. In Tokyo, there are more than two million such connections that take the water from the mains to internal systems in buildings. Historically, lead pipe was the preferred material for distribution lines because it is soft, malleable and easy to work with, especially for the last few metres from the mains to buildings. Once lead pipe is in the ground, however, various forces can act on it. Vibrations from traffic and construction work as well as subsidence and earthquakes can cause the soft lead pipes to deform, become detached or even break.

In 1980, TMGWB started to actively replace all service connections with grade 316 (UNS S31600) stainless steel pipe. In 1998 corrugated grade 316 (S31600) stainless steel pipe was introduced for distribution lines that take water from the mains to final destinations in homes, offices and industrial plants. The pipe is corrugated at regular intervals to allow for it to be bent during installation, to accommodate changes in direction and the avoidance of obstacles without additional joints. It also allows for movement of the pipe during earth movement and seismic events. By supplying a single length of corrugated stainless steel pipe, the number of pipe joints was greatly reduced. In switching to stainless steel pipe, the reliability of the water supply has increased and the leakage rate has been reduced by 86% from 15.4% (1980) to 2.2% (2013). To put this into context, since 1994 Tokyo has reduced annual water leakage by nearly 142 million cubic metres - the equivalent of 155 Olympic-size swimming pools per day, with savings in excess of US$200 million per year. Also, annual leak repairs have decreased from 60,000 (1983) to 10,000 (2013). Due to the corrosion resistance of stainless steel, TMGWB expects service life in excess of 100 years.

Graph below: Correlation between repair cases, leakage rates and installation of stainless steel pipes in Tokyo.
Courtesy of the Bureau of Water Works, Tokyo Metropolitan Government. 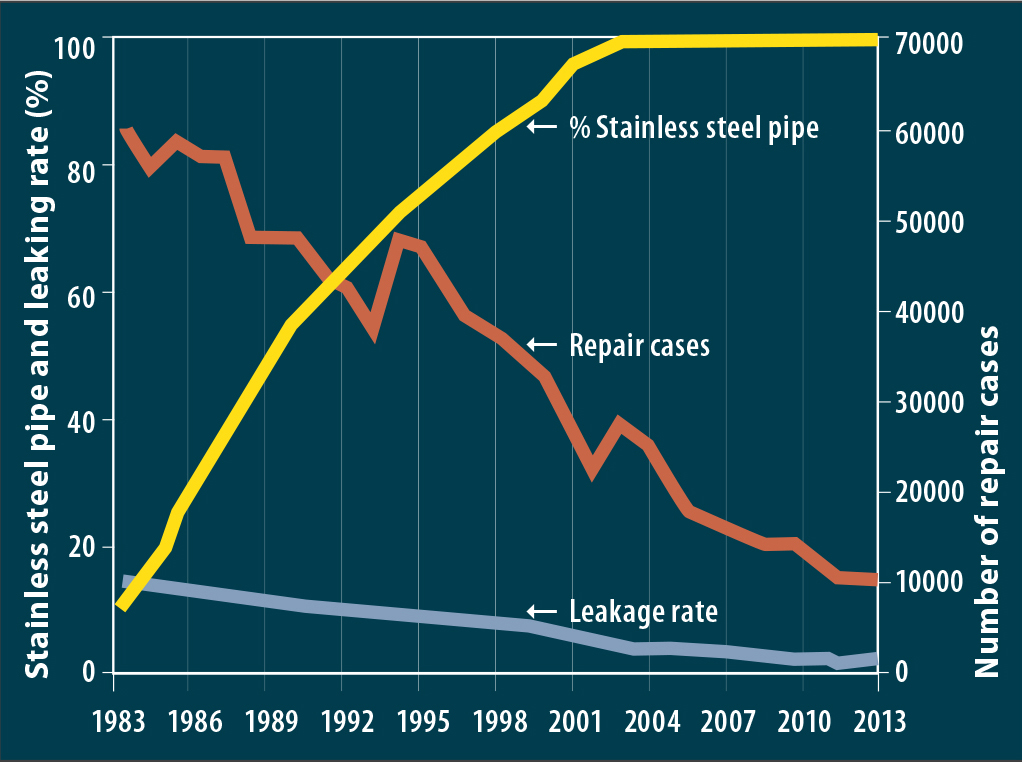 In 2002, a severe drought brought intermittent water supplies to the Taiwanese capital over a 49-day period. Of the 450 metering areas in the city, 40% were losing half of their water or more before it reached consumers.

Analysis of repair cases showed that while polybutylene pipe made up only 3% of the length of the system, it accounted for 28% of all leaks. Approximately 90% of all problems occurred in plastic pipes, with the vast majority (83%) caused by cracking.

In 2003, the Taipei Water Department began a similar program to Tokyo, replacing distribution lines with corrugated grade 316L (S31603) stainless steel pipe. Although the ongoing program has so far only replaced 35% of the lines, the result has been a reduction in water loss from 27% (2003) to 17% (2014). This adds up to an annual saving of 146 million cubic metres of water, the equivalent of 160 Olympic-size swimming pools per day.

In 2014, a drought occurred with even less rainfall than the 2002 event which precipitated the pipe replacement program. However this time, the improvement in leakage rates achieved since 2003 meant there was no interruption to the water supply. 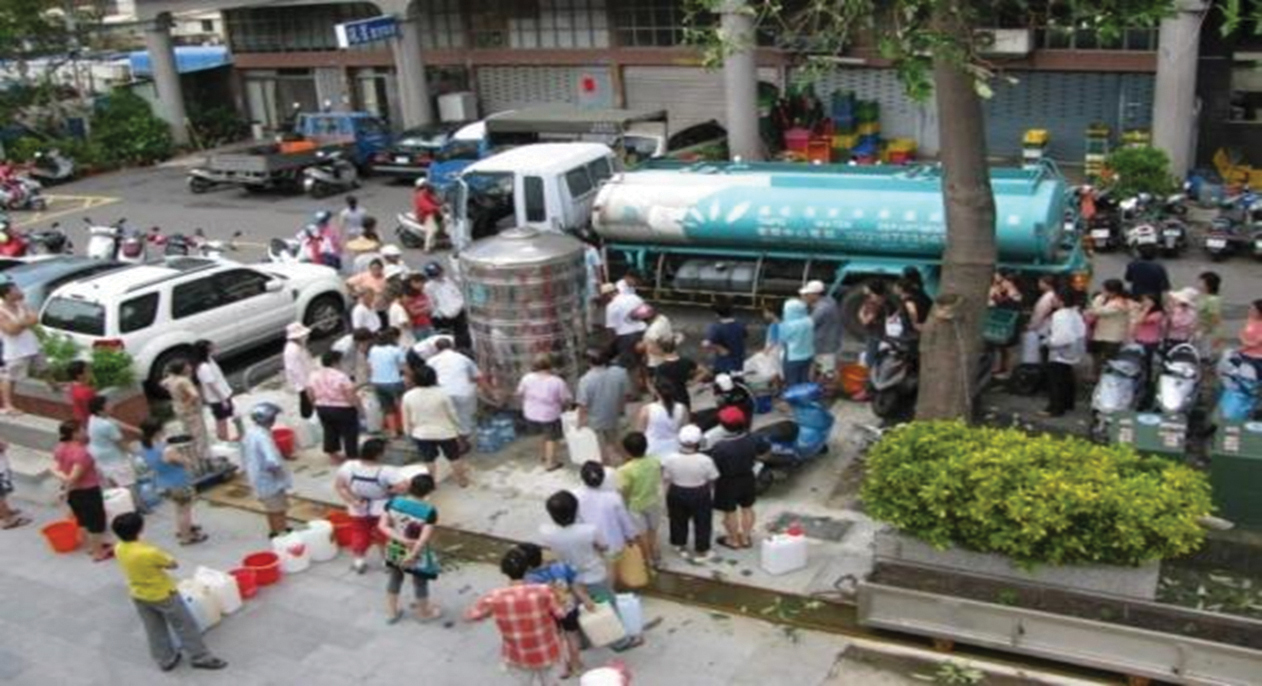 South Africa is by nature a semi-arid country; its annual rainfall is only half the global average. It has a population of 55 million and is facing freshwater scarcity. It is estimated that at least 37% of its clean drinkable water is lost due to leakage from old and unreliable infrastructure.

The Groot Drakenstein Valley is the cradle of the South African deciduous fruit and wine industries. Water is supplied to over 800 farms including 50 vineyards. Here, there are numerous examples of carbon steel and cast iron pipes that have failed in many areas after just one year due to the very aggressive acidic soils and high water table. “We started a project in 1992 in the Drakenstein Municipality to replace existing piping with stainless steel,” explains André Kowalewski, Senior Engineer - Water Services, Drakenstein Municipality. “We have reduced water loss to around 13% in comparison to the 37% national average. Ten years back only the Drakenstein Municipality used stainless steel. Now 80% of the Western Cape municipalities do.”

André and his team plan for a life expectancy in excess of 50 years. Stainless steel used in Drakenstein is primarily grade 316 and in some cases grade 304 (S30400) in visible locations. Projects are currently focussed around pumping, purification, storage, pipelines and sewage. One such project is a 500 mega-litre/day delivery system completely in grade 316 stainless steel. 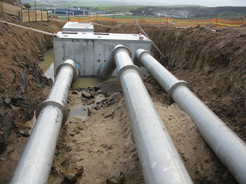 Investing in the future

The experience of Tokyo, Taipei and the Western Cape gives water authorities the confidence to specify stainless steel for piping systems. While the initial cost compared to competing materials may be higher, stainless steel has been shown to be a good investment over its long life, paying back each year in reduced maintenance and cost per litre processed.