New (and extended) life has been injected into a Brisbane landmark courtesy of a stainless make over worth about $1.2 million.

In an application believed to be the first of its kind in Queensland, engineers have used grade 316 stainless steel to replace the bearings on Brisbane's Victoria Bridge.

The transition from original carbon steel to stainless has increased the service life of the bearings to at least 50 years from 30 years, giving the Brisbane City Council at least 20 years before the enormous labour and logistical costs of servicing bearings is required.

he bridge, opened in 1969, spans the Brisbane River between the Central Business District and South Bank and is a major arterial link in the city's transport system. Any interruption to traffic flow is disruptive and costly.

Corrosion of the bridge bearings has always been an issue due to its proximity to tidal water and also from the corrosive influence of droppings by pigeons that nest around the bearings.

The Brisbane City Council hired an independent consultant, Dr Nick Stevens, to design the bearings and advise on technical issues associated with their replacement. After consultation with Hercules Engineering the use of stainless steel was recommended.

"The initial outlay is completely negligible compared with the extended service life that stainless steel provides and the cost of installation," Dr Shaw said.

"We (the Council) can now wait at least an extra 20, hopefully 50 years before we need to plan such a major operation."

In future the bearings should suffer wear only and hence should require only replacement of the pot This operation should be far cheaper than complete bearing replacement.

Examination of the 30 year old carbon steel bearings showed severe overall corrosion, deep gouge marks and pitting corrosion where the PTFE (teflon) between some of the bearing plates had completely worn away.

Grade 304 stainless steel woven mesh was installed around the bearings to keep the pigeons out and further protect against corrosion.

The bearings were fabricated by Hercules Engineering in Sydney with stainless steel supplied by ASSDA member Sandvik Australia. 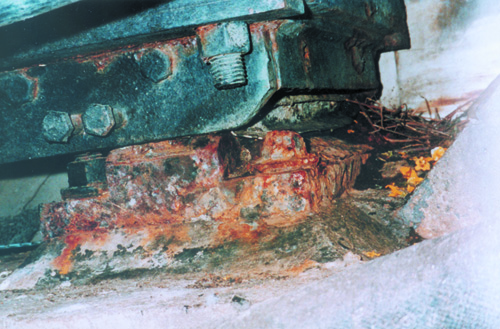 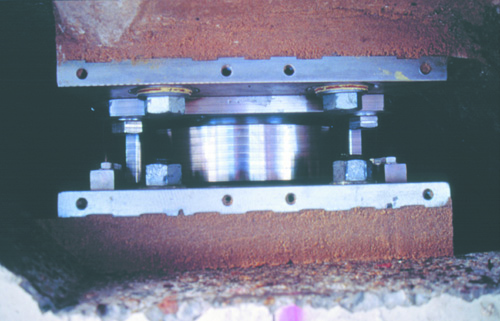