Sea World's latest attractions, polar bear cubs Lia and Lutik, have captured the public's attention since their arrival from Russia late last year. The one-year-old siblings join resident polar bears Kanook and Ping Ping, who have already given the park one of its most successful years since Polar Bear Shores was built in 2000.

The use of stainless steel in the construction of the polar bear enclosure contributes to giving park visitors a close look at the playful cubs and the adult bears. Large underwater viewing windows, supported by stainless steel frames, allow the public to watch the bears swimming and diving in a four-metre deep pool.

The health and well-being of the bears is a prime consideration in the design of their custom-built enclosure, which Sea World says "leads the world in providing a naturalistic and stimulating environment utilising the latest in polar bear technology, drawing on international research and knowledge." 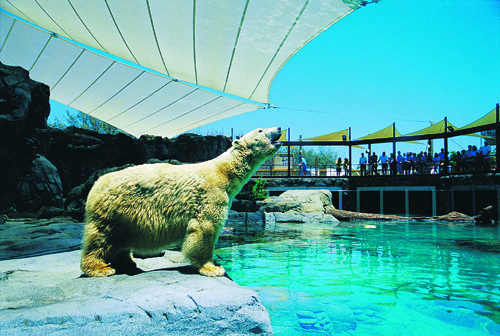 The exhibit features natural landscaping, chilled water pools, shade cover, water misters and streams, wind generators and diving and climbing opportunities. Stainless steel plays a significant part. The larger bears are powerful animals, and strong stainless steel doors onto the exhibit ensure their security as well as the keepers'. The four air-conditioned den areas are made of grade 316 stainless, selected to withstand the corrosive effect of bear urine and daily hosing out.

Introducing the bears to one another had to be carefully managed. A specially designed stainless steel mesh screen known as the "howdy window" separated the older bears during the quarantine period, while allowing them to see and smell each other. Kanook, who was 16 when she was brought to the Gold Coast from Arizona, has taken the dominant role while Ping Ping, a young curious five-year-old when he arrived from China, is more submissive. The screen was a success with the two now getting along well together. The same method is being used to familiarise the bears and the new cubs without any risk to Lia and Lutik.

Bringing the polar bears to Australia was the culmination of three years of research and planning. Sea World says there has been overwhelming interest and support from the public which in turn can only assist conservation efforts for the polar bear.