Melbourne's public life is populated with unique, strong and take-as-you-find personalities. Its culture – from high to mass – is influenced by figures like Jeff Kennett and Sam Newman, who shape Melbourne's view of itself and its environment. 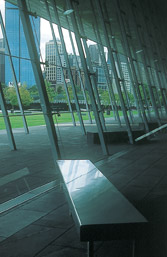 While the former Premier's impact on the Victorian capital has been comprehensive, the refurbishment of Brighton Sea Baths as an upscale nightspot part-owned by Mr Newman has contributed a smaller scale landmark which is just as likely to provide visitors (male ones, anyway) with a memorable impression of the city.

The retired Geelong player and AFL Footy Show co-host, well-known in Melbourne for his flamboyant lifestyle, including a 5m high mural of pop icon Pamela Anderson at his Brighton home, came up with a quirky idea for the urinal: a built-in wide-screen TV (main image).

ASSDA member Britex, working with Buxton Constructions' Adrian Seymour and architects McGauran Soon Pty Ltd, were able to deliver the goods thanks to the versatility of stainless steel.

Melbourne's CBD has undergone a transformation in recent years, and everywhere stainless steel is playing a significant role. It’s proving its durability and appeal in major public facilities, such as Colonial Stadium (urinals) and Vodafone Arena (food preparation areas), both venues which showcase the city’s top sports events and attract many international visitors. The facilities must perform under the pressure of large crowds and yet look good.

Stainless steel fulfills these requirements here as it does at the Melbourne Convention Centre. The Centre, one of the country’s premier sites for international events, makes the most of its riverside location, with floor to ceiling windows framing views of the Yarra and one of Melbourne's best-known attractions, the Polly Woodside. Stainless steel benches in the foyer are in keeping with the clean lines and open spaces (see image, right).

Stainless works equally well in boutique refurbishments, such as Brighton Sea Baths and Retreat on Spring, an upmarket health resort tucked away near Melbourne’s gracious old Parliament buildings. The design language of Retreat on Spring is quiet, peaceful, harmonious.

Blond, polished floorboards, bamboo and stone set a tranquil tone. Stainless steel slips easily into this combination of natural elements and muted colours, while providing a practical surface in the health bar area and for the vanities in the individual therapy rooms.

From the intimate setting of Retreat on Spring to the high-traffic amenities at the city’s massive sports arenas, stainless steel is perfectly at home, providing both understated elegance and rugged performance.