The last issue of Australian Stainless contained an overview of coated abrasives and guidelines for achieving the desired surface finish. This technical series continues with a comparison of grit size and hardness. Read Part 1. Read Part 3.

Early versions of abrasive sheets and rolls were made by sprinkling naturally occurring grit, such as sand or emery, onto cloth or paper coated with animal hide glue. The resulting 'sandpaper' was used for surface finishing in woodwork or preparing a surface for paint or varnish. Because the application of the grit was random the product soon became dull and lost its cut.

Not long after the development of paper products, the flexible emery cloth roll made its appearance in metal working workshops as a standard tool for rust removal and light finishing. By contrast, solid bonded grinding wheels were developed for heavy stock removal in foundries.

3 Elements: Backing, Bond and Grain
Modern coated abrasives allow stock removal up to 30 times faster than with a bonded grinding wheel. This superior performance has been brought about by improvements to all three elements of coated abrasives: backing, bond and grain.

Paper - available in various weights up to 300 gsm (grams per square metre) in widths up to 1650mm.

Combination - linen scrim cloth plus paper in widths up to 1000mm.

Bond
Natural glues can be used for the matrix supporting the abrasive grain but modern abrasives generally use synthetic thermosetting resins which are stronger, tougher and more heat resistant.

The important characteristics of grain are hardness, friability, toughness and shape.

The graph below shows the hardness of selected materials including abrasives. 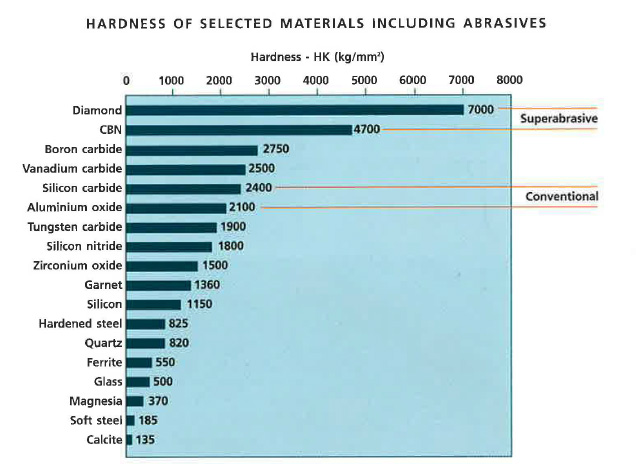 Relative Comparison of Grit Size
The selection of the correct grit size and sequence is vitally important in achieving the desired surface finish. The most common grading system in use today is the FEPA or 'P' series (Federation of European Producers of Abrasives).

However, certain products made in the US or Japan may be graded differently. Equivalents are provided in Table 1.

Abrasive Production
The majority of abrasive manufacturers employ a reel to reel process to combine the backing, adhesive bond and grit into an efficient cutting tool.

As shown below, he grain is propelled into the wet adhesive by means of an electrostatic force. This critical part of the manufacturing process ensures a sharp, long lasting product. In order to further secure the abrasive grain, an additional coat of adhesive, known as a 'size' coat, is applied and the whole product is dried and cured. Certain products (called multi-bond or super-sized) have a further coating applied in order to minimise heat build up and subsequent welding action. This feature is particularly important in the case of stainless steel grinding because non-oxidised steels are very reactive at interface grinding temperatures and they combine readily with the aluminium oxide grain. This phenomenon is visible as a silvery sheen on the surface of an abrasive belt. Once the grain has been 'capped' with metal it can perform no further cutting action and merely increases frictional heat and subsequent degradation. 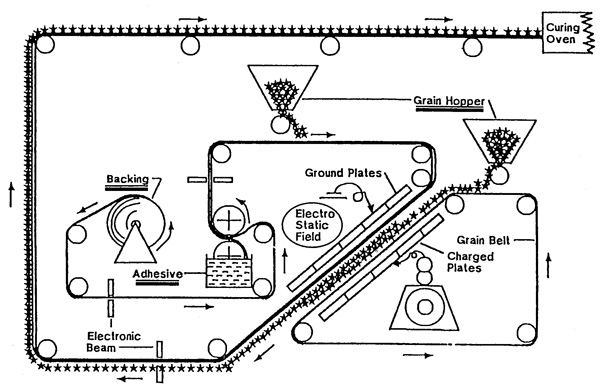 Using Abrasives Economically
There are a number of factors to be considered to obtain best value from coated abrasives. If obtaining a specified, repeatable finish is an important consideration it may be most economical to limit the abrasive belt to a set amount of polishing, for example a certain number of metres of coil. If specific finish is not a criteria the abrasive can be used to the very end of its life. Saving time or power usage and utilising the most technically advanced product can be as significant overall as the amount of abrasive consumed. 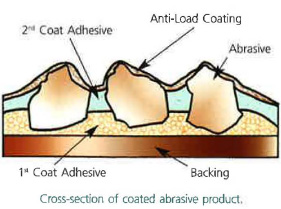 Words by Charles Fenton. Charles E. Fenton is Managing Director of Kongspor Abrasive Technologies, Australia. The next article will look at specific finishes and their generation using coated abrasives.