This article is the final in a series on common finishes. Previous articles in this series dealt with the workhorse No. 4 (2J/2K) (AS36, Winter 2006) and the mill finishes 2R (BA), 2B and 2D (AS38, Summer 2006). This article looks at mirror, profiled and coloured surfaces.

Mirror polished surfaces, as the name implies, have a bright reﬂective surface which give a mirror like image.  They are the most labour intensive mechanically ﬁnished surface with an obvious impact on cost and time of production.  As ﬂ at product, mirror ﬁnishes are produced by post mill abrasive polishing of either hot rolled or cold rolled sheet or strip.

Although mirror ﬁnishes are only deﬁned in standards for ﬂat products, it is also possible to generate a mirror polish on surfaces where there is sufﬁcient access for the grinders and polishing mops.  The exception to this is materials with large or variable microstructures such as some castings or heavily cold worked items or welds.  In these cases, it may not be possible to obtain a mirror surface with a clear image or a uniform lustre. 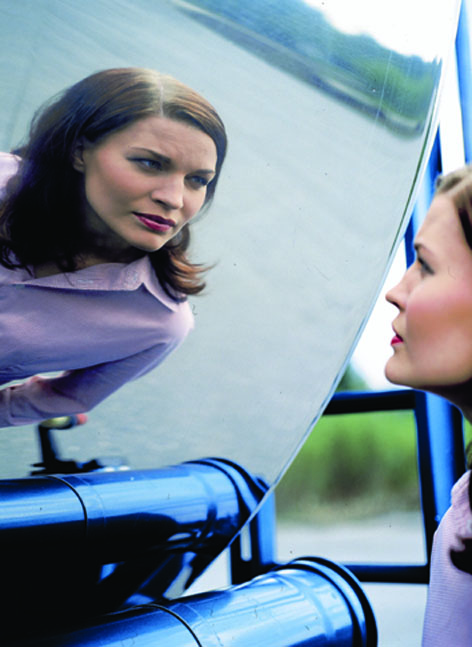 Mirror polished surfaces are produced by grinding with successively ﬁner abrasives where the next grit size is not selected until all the scratches produced in the previous stage have been removed.  The surface is then buffed with “mops” (which may be soft or hard) and sticks compounded with binders and rouge of whose particle size depends on the required ﬁnish.  The bufﬁng stage does not remove much material and, if there are scratches from earlier grinding stages, they will show up as rounded furrows.  Contamination with a larger grit particle will give isolated, but very unsightly scratches.

A mirror ﬁnish is the only one that will produce a clear image of its surroundings.  Finishes such as the cold rolled BA or an electropolished 2B or even a No 4 ﬁnish with a very low Ra that is then electropolished, will be brilliant and reﬂective but they will not form a sharp reﬂected image.

Specifications
Both ASTM A480 and EN10088-2 include mirror ﬁnish speciﬁcations called No 8 and 2P respectively.  Mirror ﬁnish is described as a non-directional ﬁnish which is reﬂective and has good image clarity.  The surface will be essentially free from grit lines due to the initial grinding stages but there will be visual differences between surfaces produced by different suppliers to these speciﬁcations.

For mirror ﬁnishes, requiring that the surface has a speciﬁc surface roughness (Ra) is not very useful.  Gloss measurements are a useful technique on ﬂ at surfaces especially if both diffuse and specular reﬂection are measured.  Not surprisingly, diffuse reﬂectance is always higher. If a higher level of confidence is required for critical applications, then agreement on comparison with a finished sample in agreed conditions is recommended. It is the most reliable method of detecting random scratches.

Applications and Limitations
Mirror ﬁnish is most widely used for plates in presses, on the interior surface of moulds and also for small mirrors, reﬂectors and architectural panels.

The two primary limitations are:

• the most commonly used grades (304 and 316) are quite soft so that any cleaning process must avoid scratching the surface with residual dust or applied cleaning compounds, and

The ﬁrst limitation is overcome by careful cleaning protocols using adequate water rinsing.  The effect of random marks and scratches is reduced if the surface is corrugated at the macro level described below when using surfaces that are texturised (single sided deformation) or embossed/rigidised (through thickness deformation).  However, while mirror sheet may be proﬁ led, it is more common to apply proﬁ ling treatments to cold rolled sheet.

Profiled or Patterned Surfaces
EN10088-2 uses categories 1M and 2M for sheet material that has been patterned on one side only.  The 1M group applies to hot rolled base materials while the much more common 2M applies to cold rolled base materials, usually with a 2B, 2D or 2R (BA) ﬁnish.  In corrosive environments it is essential to orient the pattern to allow free drainage.

Through Thickness Deformation
EN10088-2 lists 2W for cold rolled sheet that has been cold rolled into a through thickness corrugated  pattern. The cold work strengthens the sheet and may permit the use of thinner sheet.  The rigidity also helps control oil-canning, i.e. local buckling caused by thermal expansion during ﬁxing or temperature changes during the year or day.  The surfaces are often described as embossed or rigidised.

Coloured Stainless Steel
Stainless steel can be painted provided that the surface is scrupulously clean and has sufﬁcient proﬁle to mechanically anchor the paint.  Using a stainless steel base metal offers the advantage that, even if the coating is damaged, any rusting is superﬁcial and will not lead to long term structural failure as has occurred when protective coatings fail on steel or aluminium structures.

However, painted organic coatings are a clumsy means of colouring stainless steel.  If it is simply to be blackened, then the molten sodium dichromate process or a hot sulphuric acid treatment or even an electrodeposited and baked organic coating could offer greater durability.

Other colours are offered by an electrochemical deposition process that deposits and hardens an enhanced oxide ﬁlm on the stainless steel although usually only on 304.  The colour depends on the thickness of the oxide and progresses from blue to gold to mauve and green with time of exposure.

The colour is similar to the interference colours in an oil slick or soap bubble with interference between the light reﬂ ected from the top of the oxide and base metal.  In theory the colouring could be reproduced on any simple shape but in practice, it is only available on sheets.  The coated sheets may be deep drawn, formed, bent and ﬁxed mechanically but welding destroys the coloured ﬁlm.  While the oxide ﬁlm is harder and more resistant to scratching than the basic 304 substrate, it is still susceptible to mechanical damage and so is not suitable in areas subject to heavy trafﬁc.  Corrosion tests on blue coatings on 304 showed slightly improved resistance to atmospheric and acidic chloride exposure over the resistance of 304.