The work of Anna Eggert is not new to ASSDA, or to those familiar with the 2005 Reference Manual where her pieces entitled “Belinda’s dress” featured on the cover. 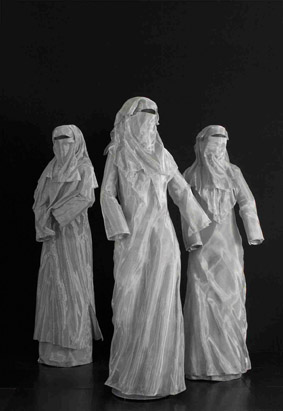 Two years on, Anna’s love of stainless steel continues, as she begins work on a new project which has seen her nominated for the 2007 McClelland Award.

The work, which will be put forward for a chance at the $100,000 prize money, is similar to that shown, and again uses stainless steel mesh.

“Mesmerized” is an eight piece artwork  continuing an investigation into the female identity.  In particular, Anna explores the inherent nature of those outside the Muslim religion, who become ‘mesmerized’ by their own curiosity of a women dressed in hijab.

The production of the pieces begin with a roll of stainless steel mesh.  The material is rolled out and a pattern is penned before cutting with a nibble.

All pieces are made with grade 316. The base layer of the pieces use quite a coarse stainless steel with a 1.0mm aperture x 0.56mm wire diameter (known as 16/24). A softer layer is then used on top, with a mesh known as bolding cloth which has an aperture of 710 micron and wire diameter of 0.20mm.

Anna says all her stainless steel mesh is supplied by Metal Mesh in Sydney who have been very supportive of her work. Various pieces of Anna’s repertoire of work will be displayed in NSW, Canberra and Noosa in the coming months, with the winner of the McClelland Award to be announced in November.