New infrastructure in the heart of Sydney is set to transform the busy transport hub and provide a stylish new gateway to the Barangaroo development.

A growing population in Australia's most populous city calls for innovative design, so when the NSW State Government commissioned construction of the Wynyard Walk, ASSDA Sponsor and Accredited Fabricator Stoddart stepped up to the challenge.

The Wynyard Walk forms one of several solutions to break congestion in the Sydney CBD, allowing pedestrians to move from the Wynyard transport hub to the new development at Barangaroo waterfront in six minutes, avoiding steep hills, busy intersections and inclement weather events.

With an estimated 75,000 commuters using the busy hub every day, traffic flow is expected to increase to 110,000 over the next seven years in what is traditionally Sydney's third busiest station.

The tunnel will become the main arterial connection between Barangaroo and the city's transport network and provides vital infrastructure into the future.

Alongside CPB Contractors, Stoddart incorporated over 1,600m2 of perforated and solid stainless steel sheeting fabricated into ceiling and fascia pannelling installed in the Clarence Street entrance facade and the tunnel lining. The new Clarance Street entry point is a multi-level portal descending to Wynyard Station via escalators and elevators.

A major consideration for the design team was to ensure aesthetic value for commuters and visitors alike.

Inspired by nature and Sydney region geology, the design concept for Wynyard Station focused on flow, with all materials selected to create a sense of motion as part of a unified architectural expression.

The intricate patterns were all designed and executed within Stoddart's factory in Karawatha, Brisbane. The design work was completed wholly on CAD and Solidworks to ensure each panel fitted exactly into the patter and alongside adjacent panels. The Brisbane facility completed all aspects on the manufacture.

The external facade from Clarence Street to Wynyard Station was completed using perforated metal panels on the new access area via escalators and elevators down to the station several levels below.

The complicated ceiling pattern proved challenging, but not insurmountable, resulting in a beautiful floating effect beckoning commuters along.

The project signalled the completion of Stage One of a $160 million upgrade to Wynyard Station.

The Kent Street level incorporates an extraordinary twenty-metre digital media screen which showcases flowing images of time, travel and places from all over Sydney throughout history, providing commuters with a far more entertaining commute than traditional toilet-block-tiled underground tunnels.

For tens of thousands of commuters who daily traverse the tunnel, Wynyard Walk is a time and energy saving alternative to the street level traffic roulette they once faced.

The added bonus is the stunning, aesthetically pleasing surrounds, the shiny panels and beautiful architecture, all of which was made possible by the use of stainless steel. 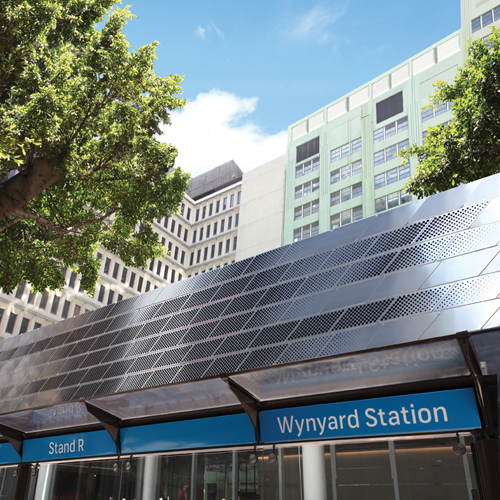 This article is featured in Australian Stainless Magazine Issue 59 (Winter 2017).