Queensland’s largest ever road and bridge project will rely, in part, on innovation within the stainless steel industry to meet its design life of 300 years.

The Gateway Upgrade Project in Brisbane, which includes construction of a second Gateway Bridge and is being delivered by Queensland Motorways with design, construction and maintenance by the Leighton Abigroup Joint Venture (LAJV), will use reinforcement bar made for the first time from Outokumpu Group’s LDX 2101® duplex stainless steel.

A total of 130 tonnes of duplex stainless steel will be used in the bridge’s most critical structures: the splash zones of the two main river piers (28 tonnes of LDX 2101® have already been supplied and some Duplex 2205 will be used due to availability of dimensions for certain components).

Outokumpu’s Qld and NT Manager Ken Hayes said that in bridge construction, stainless steel should be specified for parts where it makes a positive contribution, such as splash zones and the bridge deck. 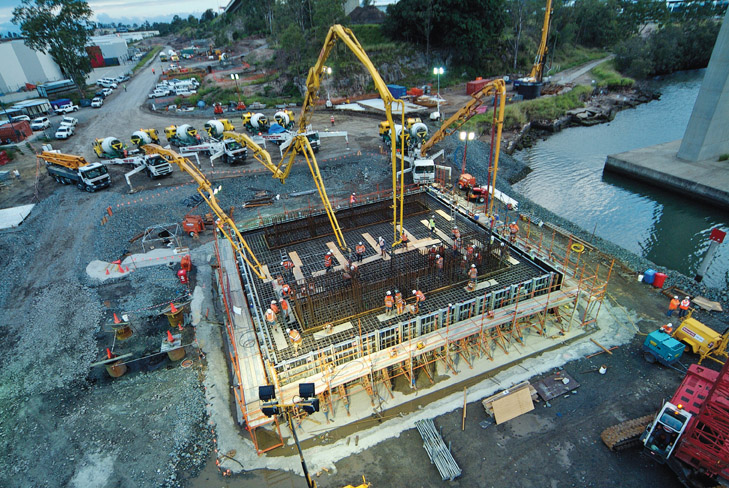 “If carbon steel rebar is used, the bridge deck needs a water-proof membrane and the concrete must be of high quality, whereas if stainless rebar is used, reduced concrete cover can be specified, and it is also possible to relax the design criteria with respect to maximum crack width,” he said.

“As a result, with stainless rebar, bridges can be built either with no extra cost or for a lower cost than by using carbon steel reinforcement.”

“The win-win outcome from the use of LDX2101® is much improved sustainability in our constructed environment,” he said.

Because LDX2101® had never been used for rebar before this project, Outokumpu’s metallurgists carried out extensive tests to ensure it would withstand a high corrosion environment if the concrete were permeated by seawater.

A trial rebar coil was also sent to Atlas Specialty Metals’ Durinox facility in Melbourne to ensure it could be easily straightened.

Durinox Manager Colin McGill said they had to decoil the material, cut it to length and bend it to the appropriate shape.

“This was the first time we had processed the material and there were some challenges we had to overcome because of its very high strength,” Mr McGill said.

Once Outokumpu’s quality system and external testing criteria were approved by LAJV, the initial 28 tonnes of the hot rolled, ribbed, 16mm LDX2101® were delivered to Atlas Specialty Metals in Melbourne in 750kg coils for processing between October and December 2007.

The $1.88 billion Gateway Upgrade Project will be completed in 2011. It includes duplication of the original Gateway Bridge (which was completed in 1986), upgrade to 12km of the Gateway Motorway and construction of a new 7km deviation providing better access to Brisbane Airport.

Just over 20 years after it was constructed, the original Gateway Bridge is now exceeding capacity, carrying more than 100,000 vehicles each day.