Selected from a field of 36 international teams, the design team, incorporating Australian architects the Cox Group, engineers Arup and Singapore-based Architects 61, has designed an entirely new concept in bridge construction, based on the double helix structure of DNA.

The double helix will carry a metre wide pedestrian walkway running parallel to a six lane vehicular bridge, which is part of the same $68 million project.

Arup senior associate Greg Killen said the pedestrian bridge was a true world first, in that it did not use any of the known support mechanisms which categorise all bridges built to date. The shape of the bridge can be described as two slinkies, one stretched out slightly further than the other, flipped, and then placed inside the first. This shape is then doubly bent to form a smooth curve.

As far as we know, this design direction has not been explored before, Mr Killen said.

Mr Killen said the helix tubes touch only under the deck and the unravelling forces were captured elsewhere by light stiffening rings that hold the opposing tubes apart (rather than together) in a kind of structural magnetism.

The concept enabled the use of five times less steel than a conventional box girder bridge of the same length, which meant the budget would run to the use of stainless steel.

We chose to design in duplex stainless because we've used it on a number of projects before and while the strength is comparable to structural mild steel, the maintenance costs are reduced and the total life of the bridge is extended beyond 100 years, Mr Killen said.

There is a perception in the marketplace that the cost of grade 2205 duplex is much more than austenitic varieties such as 316. This is not the case and while there is great fluctuation in both prices, the fabrication costs are similar (although some of the processes are slightly different).

The higher strength of 2205 makes a big difference, especially on 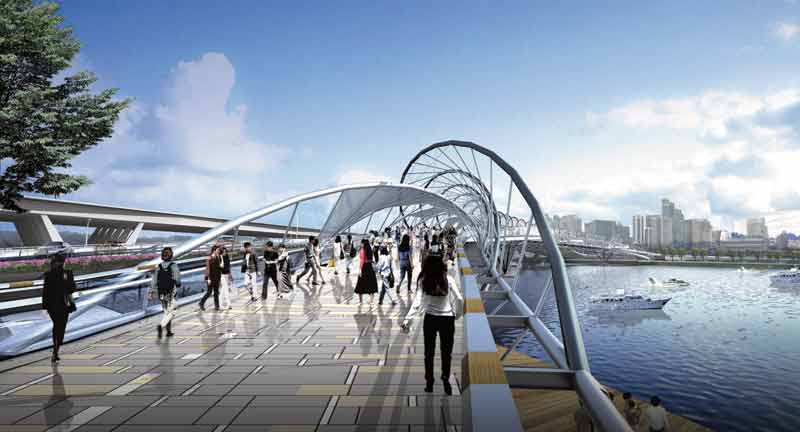 longspan structures where the self weight is often the major design driver. 2205 also has superior durability including resistance to the tea staining that plagues many austenitic structures.

Singapore, a busy air hub with a very small land area, has become well respected for the quality of their buildings and infrastructure.

Singapore is not only clean and leafy, there is a noticeable emphasis on quality urban design. The urban landscape includes extensive use of materials such as stone, glass and metals where Australian cities may favour cheaper, less durable solutions. This makes Singapore the perfect platform for the world's first double helix bridge, Mr Killen said.

The project will use 370 tonnes of duplex stainless steel for the superstructure, including pipe, and welded plate and tapered sections. Stainless finishes selected by the Cox Group include a combination of bead blasting and polishing, with one of the slinkies to be highly polished and the other bead blasted, using olivine, a magnesium silicate medium.

The project, which is currently out to tender, is expected to begin construction at the end of this year and be completed in 2009. 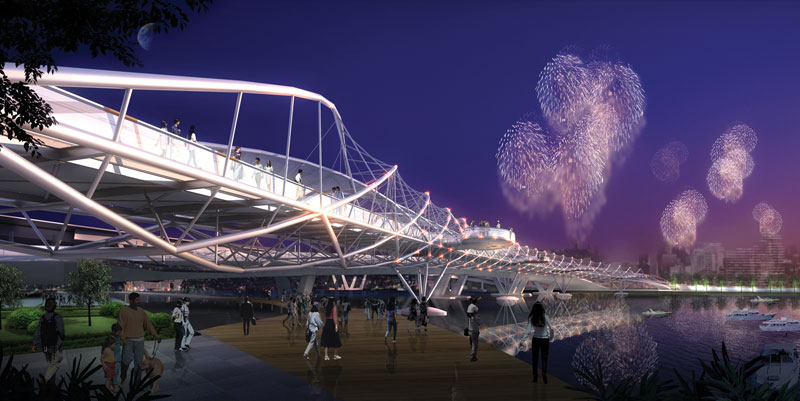