BACKGROUND
The majority of stainless steel is drawn from the austenitic family because these grades are readily formable, weldable and tough. These chromium-nickel (CrNi) and molybdenum-containing grades were traditionally grouped under the 300 series banner.

However, driven by the increased price of nickel several years ago, there has been renewed interest in lowering the nickel content of austenitic grades while maintaining the austenitic crystal structure. This is achieved by using combinations of higher manganese and nitrogen and even by adding copper.

These high manganese grades - 200 series austenitics - were first developed in the 1930s and were expanded during World War II because of a lack of domestic nickel supplies, especially in the USA.

Many of the new 200 series alloys have proprietary compositions that can vary with manufacturers’ processing. They are not classified or standardised under the ASTM/SAE three-digit codes.

FEATURES OF 200 SERIES
The mechanical, physical and forming properties of the CrMn and CrNi grades are very similar, although the CrMn grades generally have higher tensile strength because of higher nitrogen levels and a higher work-hardening rate because of the nickel level.

The conventional CrMn grades are used in hose clamps or lamp post clamps – thin material heavily cold worked for strength. Proprietary grades are used in galling-resistant applications such as bridge pins or in marine boat shafting, although duplex grades are a strong competitor. A disadvantage of CrMn grades is that the lower nickel content means a higher risk of delayed cracking after deep drawing.

A quirk of the conventional 200 series higher manganese grades is that they do not become magnetic when they are heavily cold worked, hence their suitability for use as end rings in electrical generators.

CORROSION RESISTANCE
The corrosion resistance of the newer CrMn grades is generally inferior to similar CrNi grades. To maintain the austenitic properties, the ferrite forming elements (chromium, molybdenum and silicon) must be in the correct proportions with the austenite formers (nickel, carbon, manganese, nitrogen and copper). If the strong austenite formers such as nickel are reduced, the corrosion-resisting, ferrite-forming elements must also decrease.

SENSITISATION
This occurs when chromium combines with carbon in the steel and forms micron-sized particles of chromium carbide so the chromium is unavailable to form the protective oxide film. The original 200 series increased the carbon level to remain austenitic (see Table 1), but this encouraged sensitisation during welding and is one reason that CrMn grades are not used for fabricated items.

DURABILITY
The newer grades, such as the Indian-developed J1 and J4 (see Table 2), are intended for use in milder environments. The low nickel content requires a reduction in the chromium content to about 15-16% compared to the 18% industry-standard 304. This is a significant reduction in corrosion resistance, especially for the very low nickel versions, and these small differences in chromium content can have a significant effect on durability.

The newer, low-nickel CrMn grades are successfully used in India, mainly for components such as cookware or mixing bowls that are formed rather than welded. The use of these grades has spread across South-East Asia and especially into China where the increase in capacity for 200 series production was about 3 million tonnes last year - or about 10% of the world’s production. 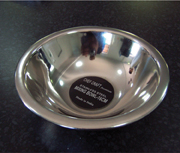 CONFUSION OF GRADES
The switch in use to CrMn grades (and not just the J1 and J4 grades) has continued despite lower nickel prices because of the perceived benefit of lower price. Unfortunately, the increased use of less corrosion-resistant grades has confused the industry as the CrMn grades are not magnetic and, at least initially, appear to be stainless and are often assumed to be 304 or even 316.

The confusion arose from decades of familiarity with magnetic, lower corrosion resistance ferritic grades such as 430 in contrast to the more corrosion-resistant and non-magnetic 304 or 316. In fact, magnetism has no relationship to corrosion resistance. Grade mix-ups have caused serious corrosion failures in industry and customer dissatisfaction due to less serious corrosion defects like tea staining. This has mainly occurred in Asia but also in Australia.

The variable impurity levels, particularly of sulphur and phosphorous, was a serious issue when there was a significant volume of the new CrMn grades produced by smaller, older mills. The increase in modern production facilities will proportionately reduce this risk. However, the metallurgical necessity to increase carbon levels for austenite stability in specific CrMn alloys means that welded fabrications still require thin sections or rapid cooling to limit sensitisation and the consequent increased corrosion risk.

IDENTIFYING GRADES
It is possible to distinguish between CrMn and CrNi grades by either portable and expensive X-ray fluorescence equipment or, more simply, by drop test kits to detect Mn (CrMn vs CrNi) or Mo (304 vs 316). The kits often use a filter paper and a battery to ensure the test will work rapidly even with cold metal. See ASSDA’s Technical FAQ No. 4 for further details.

QUALITY CONTROL
Users need to ensure they have good quality control systems to avoid installation of a low-level CrMn grade rather than the expected high-level austenitic. The relatively unknown conventional 200 series has a sophisticated niche. However, for cost reasons, clients may push to use the lower CrMn grades instead of the normal CrNi austenitics or, in sheet applications, the ferritics.

SCRAP AND SORTING GRADES
The fabrication scrap and end-of-life scrap from CrMn grades are not readily distinguished from conventional CrNi grade scrap. However, the value is substantially different as the nickel is still the most costly component. This has serious implications for the scrap industry because it is likely to reduce recycling and hence the sustainable and green image of stainless steel. Fabricators will find their total costs will require rejigging as the scrap from offcuts will have lower value, probably decreasing their profitability.

Each grade of stainless steel has its merits for different applications. However, it is vital to purchase from an educated and reputable supplier of quality materials in order to achieve the desired cost and quality outcome.