A Style Statement in Stainless

The transformation of Sydney's Walsh Bay from derelict wharves and sheds into a prestigious residential complex, complete with cultural, retail and commercial facilities, provides a stage for Australian innovation in design and technology, including some of the finest examples of stainless steel structural and architectural applications.

Located amid Sydney's landmarks -the Opera House, Circular Quay, The Rocks and Sydney Harbour Bridge -the Walsh Bay Precinct is said to be "the most significant urban renewal of heritage Sydney to be undertaken for many years."

The development features 350 luxury apartments, 140 of them located on Pier 6f7, one of the five "finger wharves" constructed between 1906 and 1922 to serve Sydney's expanding commercial shipping activity. But the area's history goes back much further: Walsh Bay was one of Sydney's first industrial ports, dating back to 1820. Like many other city ports around the world, Walsh Bay ceased operations in the '70s and by the late '90s much of the area was unused and neglected. 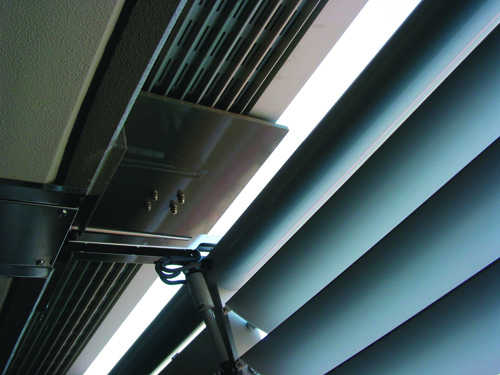 New Technology Preserves Authentic Feel
WBP was formed in '97 to undertake restoration, with an emphasis on conservation strategies such as salvaging the old hardwood timbers and historical artefacts. Over 80% of the original buildings are being retained and the style of new construction is required to evoke and interpret Walsh Bay's rich heritage. Preserving its historic appeal, unique operable louvres which mimic the original timber planks face the 200m long refurbished pier. These are made from aluminium and supported by grade 316 stainless steel brackets. The louvres pivot on stainless steel supports, allowing them to withstand winds up to 130krnlh. As a safety measure, they close automatically if the weather worsens. They were designed by Architectural Glass Projects Pty Ltd, a Sydney firm which specialises in building components such as glass facades, operable louvres, balustrading and specialised glazing. Stainless to Resist Sea Spray
To take best advantage of its Sydney Harbour location, a marina with private boat moorings accessible from ground-level apartments runs along both sides of the pier and features     stainless steel steps, gates and balustrades.

Starting with the right materials and selecting the most appropriate surface finish are key factors for ensuring the quality and life-cycle of the finished project, particularly in harsh marine environments. A surface roughness (Ra) under O.SJ.Jm using 320 grit abrasives was specified for the stainless steel used in this project. Mechanical grinding was followed by electropolishing, a chemical process which smooths and levels the surface, to produce the best protection against tea staining and contamination.

Surface treatments were carried out by two ASSDA members, MME Surface Finishing and Metaglo Pty Ltd. A large proportion of the stainless steel material used was imported large extruded T and 'L' sections up to 150mm deep. MME, which has the capacity to process elements up to 6.5m long by either mechanical means or electropolishing, modified machines and developed new techniques to produce a consistent O.SJ.Jm finish throughout. Components were returned to MME after fabrication for immersion pickling and electropolishing.

An Asset for Sydney
The revitalised Walsh Bay precinct is set to become an attraction for residents and visitors when it opens next year. As well as offices and apartments, the development includes a new cultural centre, an 850 seat theatre, parks, restored bridges and walkways. A promenade will link Walsh Bay to The Rocks and Circular Quay, opening up the foreshore to the public for the first time in over a century.