The most common grades of stainless steel are 304 and 316, which are particularly popular because their austenitic microstructure results in an excellent combination of corrosion resistance, mechanical and physical properties and ease of fabrication.

The austenitic structure is the result of the addition of approximately 8-10% nickel. Nickel is not alone in being an austenite former; other elements that are used in this way are manganese, nitrogen, carbon and copper.

The Cost of Nickel and Its Addition to Stainless Steel

The cost of the common stainless steels is substantially determined by the cost of ingredients. The cost of the chromium that is the essential "stainless ingredient" is not high, but additions of elements that improve the corrosion resistance (especially molybdenum) or that modify the fabrication properties (especially nickel) add very much to the cost.

Other grades such as the duplex 2205 (22%Cr, 5%Ni, 3%Mo) and all more highly alloyed stainless steels are also affected.

Relative costs of the ingredients are shown in Figure 1, but these do vary widely and sometimes rapidly over time. These costs were correct in late 2004. 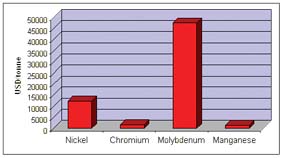 The point of the alloying elements is that they achieve certain changes to the corrosion resistance or to the microstructure (which in turn influences the mechanical and fabrication properties).

Chromium is used to achieve corrosion resistance, and molybdenum adds to this.

A common evaluation of corrosion resistance of stainless steel grades is the Pitting Resistance Equivalent (PRE), where this is usually evaluated as PRE = %Cr + 3.3 x %Mo + 16 x %N. A neat equation, but unfortunately only a guide.

The PRE gives a guide to ranking of grades, but is not a predictor of resistance to any particular corrosive environment. What is apparent is that pitting corrosion resistance can be increased by molybdenum, but also by chromium or by nitrogen additions. These are much cheaper than molybdenum. Despite its high PRE factor, nitrogen has limited effect on corrosion resistance because of low solubility, ie. <0.2%.

On the austenite former side carbon, manganese, nitrogen and copper are all possible alternatives to nickel. All these elements are lower cost than nickel.

As is the case for the PRE, the Ni-equivalence formulas are a guide but do not tell the full story; each element acts in slightly different ways, and it is not possible to fully remove nickel and replace it with, for example, copper or nitrogen.

Manganese acts as an austenite former but is not as effective as nickel, and Cr-Mn steels have higher work hardening rates than do apparently equivalent Cr-Ni steels.

Carbon is a very powerful austenite former, but has only limited solubility in austenite, so is of limited value in a steel intended to be fully austenitic.

Although not recognised by the PRE formula, nickel has positive effects on resistance to some corrosive environments that manganese does not duplicate.

Manganese is therefore a viable alternative to nickel, ranging from a minor addition to an almost complete replacement.

The development of high manganese austenitic grades first occurred about fifty years ago, during one of the (several) previous periods of high nickel cost.

At that time some Cr-Mn-Ni grades were sufficiently developed to be allocated AISI grade numbers Ü 201 (17%Cr, 4%Ni, 6%Mn) and 202 (18%Cr, 4%Ni, 8%Mn) are high Mn alternatives to the straight chromium-nickel grades 301 and 302, and are still included in ASTM specifications as standard grades.

Their consumption over the following decades has been low relative to their Cr-Ni equivalents. The reasons for the poor take-up of these lower cost grades have been:

An additional issue is that Cr-Ni and Cr-Mn-Ni austenitic scrap is all non-magnetic, irrespective of nickel content, but scrap merchants evaluate scrap on the basis of assumed nickel content.

This has the potential to destabilise scrap markets. The upshot is that the cost reduction (due to lower ingredient cost) has been generally insufficient to move applications from the traditional Cr-Ni grades.

Take-up has often been because of technical advantages of 200-series in niche applications, not cost-driven.

The last decade has seen the rise of some new contenders in the Cr-Mn-Ni austenitic group. The main development work has been in India and the principal application has been kitchen ware Ü cooking utensils in particular.

The very high work hardening rate of the low nickel / high manganese grades has been acceptable to a point in this application, but additions of copper have also been made to reduce this problem.

India has been a fertile development and production venue for these grades because of local economic factors.

Other Asian countries have also become strong markets and more recently also producers. The Chinese market is particularly strong, and there is substantial demand in China for the Cr-Mn-Ni grades, often referred to generically as ?200-seriesî stainless steels.

Other centres of production are Taiwan, Brazil and Japan. Alloy development has resulted in a range of austenitic grades with nickel contents ranging from 1% to 4% and up to over 9% manganese. None of these grades are included in ASTM or other internationally recognised standards as yet.

The growth rate in production of these low-nickel austenitic grades has been very rapid. The most recent data published by the International Stainless Steel Forum (ISSF) shows that in 2003 as much as 1.5 million tonnes (7.5% of the worlds stainless steel) was of this type. In China the proportion has been estimated to be 25% in 2004.

Problems still exist however, and large-scale conversion of Cr-Ni applications to Cr-Mn-Ni-(Cu) grades is not likely.

The principal issue is lack of control ‹ unscrupulous suppliers misrepresenting low-nickel product as grade 304 with some resultant service corrosion failures, and degradation of scrap due to contamination by low-nickel material.

As at the start of 2005 the future is unclear. Although it seems logical that there should be a place for the low nickel austenitic grades, the practical issues may mean that grade selectors will instead choose to either continue to use the higher cost Cr-Ni grades, or to seek lower cost alternatives amongst the ferritic or duplex grades.

ASSDA would like to thank Mr Peter Moore, Technical Services Manager of Atlas Specialty Metals, for the contribution of this article.

To order a copy of this essential technical resource for the stainless steel industry, download an order form from the ASSDA website - www.assda.asn.au or phone the ASSDA office on 07 3220 0722.