The thought of public rubbish bins usually attracts images of black smelly wheelie bins with broken lids and flies.  However, if you walked through the University of Queensland in Brisbane’s St Lucia, you would be greeted, instead, with clean stainless steel and lovely bright colours. 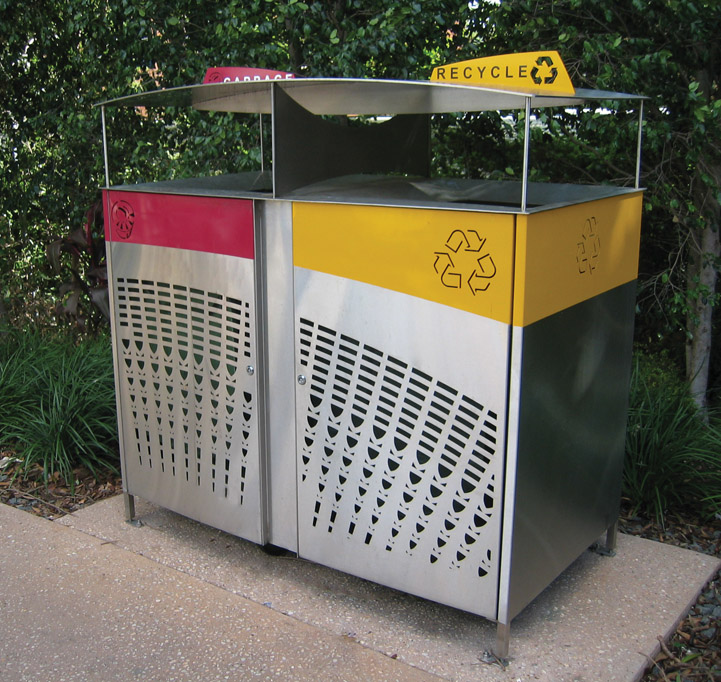 The installation of between 30-50 new double-bin enclosures has added splashes of colour and flair to the university grounds.  Designers Street and Garden Furniture Co enlisted the services of long time contractors and ASSDA Accredited Fabricators Rocklea Pressed Metal to manufacture the pieces.

Featuring laser cut patterns, bright colour spray painting (to distinguish general rubbish from recycling) and a unique shape, the bins were designed with the surrounding art deco buildings in mind.

Street and Garden Furniture Co Director David Shaw says he often uses stainless steel for outdoor use because of its robustness and he found it particularly useful for the bins.

He says students tended to decorate large surface areas with posters, so using stainless steel meant they could be easily cleaned.

“Much of the damage is often caused by people emptying the bins,” Mr Shaw also says. “So we tried to design them to make them easily accessible.  If the surface gets damaged, they can be simply re-surfaced.”

Manufacture of the bins involved 12.24 square metres of 1.6mm grade 304 sheet with a number 4 finish and 18 lineal metres of 25 x 1.6mm grade 304 square tube. A considerable amount of laser cutting was done to adopt the academic shield and to break the large surface area with an aesthetic pattern.  A floating top was also designed to minimise the dominance of the wheelie bin size and to provide a shield against weather.

“An awful lot of the things we do, those guys are involved in,” he says.  “I am totally confident they’ll provide me with what I’ve drawn.”

The University of Queensland project is a longstanding one, dating back to 1997.  The project also incorporates the installation of light poles, tree grates, signage and seats, much of which Rocklea Pressed Metal has contributed to.